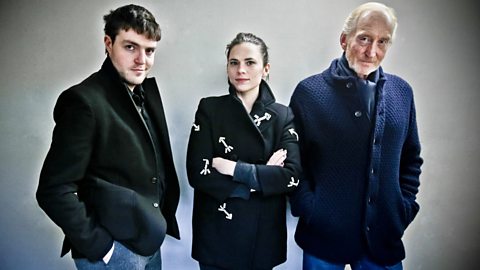 In 2016, BBC Radio 4 debuted a three-part adaptation of The Magus.  Faithfully adapted from John Fowles’ magnificent novel by acclaimed dramatist and screenwriter Adrian Hodges (My Week with Marilyn, Peter and Wendy, The Musketeers, Survivors, etc.), the radio drama stars Tom Burke as Nicholas, Hayley Atwell as Lily/Rose and Charles Dance as Conchis (shown above).

We asked Adrian Hodges to provide us with a few comments about his adaptation:

The Magus has been an important book to me for my entire adult life, so it’s a real privilege to get the chance to adapt it for BBC radio.  I can still remember the spell woven by Fowles’ extraordinary storytelling when I first read it at the tender age of 15 and my breathless excitement at each new astounding plot twist.
The Magus is unlike any book I’ve ever read, serious but playful, deep but accessible, experimental but never obscure.  I hope my radio version captures some of the brilliance of the novel and I’ve tried to remain as faithful to the book as I could — though true fans might be intrigued by one or two of my choices, especially towards the end.  Whatever the merits of those, I could not have been better served than by actors Tom Burke, Charles Dance and Hayley Attwell who play Nicholas, Conchis and Lily/Rose respectively.
Although Fowles quite rightly enjoyed enormous popularity during his lifetime, I think he remains oddly underrated compared to some of his peers.  In my view he deserves to be recognised as one of the truly great and original authors of the Twentieth Century and if my radio adaptation brings even one new reader to this marvellous book, I’ll be satisfied.  In the meantime I hope, of course, the audience enjoys it in its own right as a compelling piece of drama.

An audiobook version of this dramatization is now available from BBC Worldwide Ltd.

Click the link below for more details on the radio adaptation: